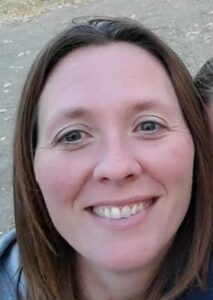 Elizabeth “Liz” Campbell
Subbing works out well for Campbell, 43, because she has prior teaching experience and her four school-age children attend the Hot Springs schools. She said she enjoys teaching young children and has received strong support and respect from teachers and administrators in the Hot Springs district.
In 2020, Campbell said she worked several days a week because many older substitutes dropped out of the workforce due to concerns over COVID-19. This year, some older subs have returned, so Campbell is working about two days a week.
Subbing for teachers who have a planned absence is easier because the teachers tend to leave behind lesson plans, as opposed to filling in for teachers who are unable to plan for unexpected absences, Campbell said. But technology, including so-called “smart boards,” allows absent teachers to quickly share classroom materials with subs via shared computer access.
Managing a classroom of students who are unknown to the substitute is challenging and may turn some people away from the job, Campbell said.
“Not all substitutes are educators, so some come in and they don’t know how to handle a classroom,” she said. ““I’ve taught before, so I know how to handle a classroom, and now in Hot Springs I know most of the kids.”
Campbell said she understands why some potential substitutes have turned away from the profession, especially in larger districts or more urban areas where children may be less respectful than in a small town like Hot Springs.
“There’s definitely a change you see in the respect from kids,” said Campbell, who has also worked as a sub at an inner-city school in Kansas City. “Those are really things that are taught in the home and part of the breakdown in families.”
The uncertain work schedule and lack of benefits may also turn some people away from subbing, she said.
School officials in South Dakota say they will continue to promote subbing as a rewarding, flexible way to earn extra money.
“It’s the most flexible job you could ever have,” said Dorman of the Sioux Falls schools. “Even if you had two afternoons free a month, we would love to have you.”
Have information to add to this story? Contact us.
Bart Pfankuch, Rapid City, S.D., is the content director for South Dakota News Watch. A Wisconsin native, he is a former editor of the Rapid City Journal and also worked at newspapers in Florida. Bart has spent more than 30 years as a reporter, editor and writing coach.
South Dakota News Watch is funded by contributions from readers like you. All content is shared, free of charge, with media outlets across the state. To support our public service journalism, please consider making a contribution today.
Donate