Holding elected leaders accountable for boorish or coarse behavior is one strategy to help restore civility to American politics, according to a panel of South Dakota experts in public discourse.
In a recent poll commissioned by South Dakota News Watch, 79% of 500 registered voters said civility in America has gotten worse over the past five years, while only 2.6% said civility has improved during that time.
Matthew Moen, a former dean of Arts and Sciences at the University of South Dakota, who has spent years studying civility in government and politics, noted that inflammatory rhetoric and childish attacks in the political realm can be addressed by citizens at the ballot box or by fellow politicians publicly condemning outlandish behavior.
“Our expectations need to be high for our representatives, now more than ever,” said Moen, who spoke as part of an online panel discussion hosted by South Dakota News Watch on Sept. 29. “We need the expectation that the leaders of this nation will embrace the idea of reason and civil political discourse and doing the right thing, and if they lose their job for calling it out, so be it. Until we can get some of those profiles in courage, I think it’s going to be hard to overcome the trolls and nitpicking and one-liners.”
The discussion was the latest segment in the ongoing “South Dakota Matters” series of polls and panel discussions hosted by News Watch.
Registered voters who responded to the poll said they believed that political leaders have the most responsibility for improving civility in America. However, respondents also placed a significant responsibility on themselves for making the country more civil.
“Don’t vote for the people that charge the environment more than is necessary,” said Jason Herrboldt, chief banking officer at First Bank & Trust in Sioux Falls who just completed a term as the president of the Sioux Falls Downtown Rotary. “We need to raise our standards on our public officials. If they are not helping to create a more civil environment, I personally believe they are not qualified to serve in positions of power.”
He also noted that civic leaders play a role in asserting influence on public policy and political trends, and that using that power in the proper ways is critical. Herrboldt also said that approaching difficult conversations with positive intentions can bring both sides closer to common ground.
“Civic business leaders have a lot of influence on political leaders,” Herrboldt said. “They need to encourage elected officials to be the wise leaders that the founders intended to see in public positions and encourage them to raise the bar on themselves a little bit.”
Deep divisions in partisan politics make it tougher to find common ground, said Shane Nordyke, a University of South Dakota political science professor. In a separate poll in 2020, when asked whether the opposing party had the best interests of the country in mind, only 2.5% of South Dakota respondents said all of the time, while 8.5% said most of the time. Nearly half of those polled (45.9%) said that the opposing party had the best interests of the country none of the time.
When political discourse is reduced to “name-calling and one-upmanship,” said Nordkye, there is a tendency for people to become demoralized and less engaged in the issues.
“One of the things that happens is people tune out,” she said. “I’ve had students say, ‘I don’t follow politics, it’s too nasty and depressing.’ I think democracy definitely suffers when people stop participating and engaging, because then it’s no longer truly representative and it’s harder to find middle ground.”
Nordkye, who also serves on the school board in Vermillion, said public meetings have included harsh rhetoric due to recent issues such as pandemic response and education standards. But she also finds the public comment period to be a valuable way to let voices be heard.
“School Board members are not allowed to respond during that period, which is frustrating at times,” she said. “But not having that back and forth actually allows you to absorb the full weight of discussion and see both sides in their entirety before you move to respond. That’s a really important part of finding middle-ground solutions that can meet everybody’s needs.” 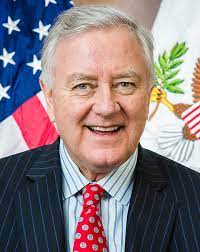 Larry Pressler
Larry Pressler, who represented South Dakota in the U.S. Senate and House of Representatives, couldn’t participate in the town hall discussion due to health issues, which he said are serious but not life threatening at this time. He issued the following statement with his thoughts on the topic:
“The issue of civility is of the utmost importance in our society,” Pressler wrote. “At its core, civility comes down to having basic respect for our common man. In a democracy, it is necessary for citizens to be able to brush aside their differences, even if they do not want to do so. In the public sphere, we must be as willing to accept defeat as we are to celebrate victory. In failing to do so, we threaten the very foundations of our society. In my view, it is the responsibility of every man and woman to promote civility in our discourse. I recognize that achieving this vision at a societal level is a difficult task, and unfortunately, I don’t have any one solution to improve our discourse. But I take comfort in knowing that bright minds such as all of you are devoting their energies to solving this most critical issue. We absolutely must improve the civility of our country!”
CLICK HERE to watch a tape of the one-hour panel discussion Championing Civility, hosted on Sept. 29, 2022 by South Dakota News Watch.
Have information to add to this story? Contact us.
Stu Whitney is an investigative reporter for South Dakota News Watch. A resident of Sioux Falls, Whitney is an award-winning reporter, editor and novelist with more than 30 years of experience in journalism. Contact Stu at stu.whitney@sdnewswatch.org
South Dakota News Watch is funded by contributions from readers like you. All content is shared, free of charge, with media outlets across the state. To support our public service journalism, please consider making a contribution today.
Donate