The Lewis & Clark Regional Water System, which serves Sioux Falls and other population centers in eastern South Dakota, has received a record amount of federal funding at just the right time to accommodate surging populations and drought conditions.
The new money will move the original system closer to full completion while also making possible expansion that is crucial in the processing and delivery of fresh water to much of southeastern South Dakota.
Tapping into an aquifer adjacent to the Missouri River south of Vermillion, the wholesale provider serves 15 community members in South Dakota, Iowa and Minnesota – including Sioux Falls and neighboring cities Harrisburg, Lennox and Tea. Though Sioux Falls has other water sources such as the Big Sioux Aquifer, smaller cities that rely solely on Lewis & Clark such as Beresford, Centerville and Parker exceeded their expected amount of water usage last summer.
That increase in demand could challenge the system’s ability to collect, treat and deliver water for residential and agricultural use at a time when nearly half of South Dakota faces either severe or extreme drought conditions, according to data from the National Drought Mitigation Center.
Last year, Lewis & Clark ran at a maximum capacity of 32.2 million gallons a day and came close to hitting that amount of usage during the summer months, forcing administrators to consider throttling back distribution.
“We put out a plea to members to voluntarily reduce their consumption to the degree they were able,” said Troy Larson, director of the water system. “Their collective efforts brought us back from the brink.”
Beyond completing the original blueprint, which could happen in the next few years, expansion of the system is already planned, with increased storage and the goal of pushing capacity to 60 million gallons a day by 2030, a project funded by the system’s members.
“That expansion is driven by the drought,” said Larson. “But just because we’re starting it now doesn’t mean it will be done tomorrow. It’s not a phased deal. Until we finish, there won’t be an additional drop of water beyond those (44.1 million) gallons.” 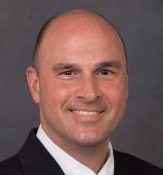