Jason Ravnsborg’s decision to not pursue re-election as South Dakota attorney general doesn’t rule out the possibility of him serving in state government following the November election, several South Dakota Republican officials told News Watch.
The speculation is part of a larger sense of uncertainty and intrigue that hover over the upcoming attorney general election in South Dakota, in which delegates of the state Republican Party will have a strong voice in charting the futures of three of the state’s top legal officials — Ravnsborg, David Natvig and Marty Jackley.
Ravnsborg faces a Senate impeachment trial June 21-22 stemming from a highway crash in which he struck and killed pedestrian Joe Boever west of Highmore in the fall of 2020. But Ravnsborg’s future in government could also hinge on the state GOP convention a few days later in Watertown, where party delegates will vote to declare a nominee for attorney general.
Ravnsborg, suspended from his duties since the House of Representatives voted for impeachment April 12, has reached out to delegates in support of Natvig, director of the Division of Criminal Investigation. Natvig is a former law-school classmate of whom Ravnsborg appointed to the DCI role.
Natvig announced his intention last month to run for Ravnsborg’s job against Jackley, the former three-term attorney general who held the post from 2009-2019. The Republican candidate in the November general election is selected by Republican delegates at the GOP convention.
The Republican nomination process is pivotal because there is currently no Democratic candidate in the race for attorney general, and South Dakota hasn’t elected a Democrat to the position since Kermit Sande in 1972.
GOP delegates interviewed by News Watch said that while Jackley is viewed as the favorite to win the nomination, convention balloting can be unpredictable, with anywhere from 600 to 800 statewide delegates expected to cast votes this year. If Natvig prevails, and wins the general election, he would be in position to appoint Ravnsborg to the AG’s office as a lawyer or even as DCI director, delegates told News Watch.
“There’s a path to victory for David [Natvig],” said Rich Hilgemann of Aberdeen, vice chairman of the Brown County Republicans, adding that he has spoken recently with Natvig, Jackley and Ravnsborg about delegate counts. “With everything going on, it was just decided that David’s chances to win this thing are a lot better than Jason’s.”
Asked about the possibility of Natvig appointing Ravnsborg to a state law enforcement role if he prevails, Hilgemann said: “It’s possible. I wouldn’t advise it, but it’s possible.”
Such an appointment could potentially occur even if Ravnsborg is convicted in his impeachment trial. State law defines the punishment as “removal from office and disqualification to hold any office of trust or profit under the state,” which some law-trained delegates interpret as meaning elected office rather than working as a state employee, an analysis that could ultimately be tested in court.
In a phone interview with News Watch on June 13, Natvig didn’t rule out any appointment scenarios but dismissed the notion that his candidacy for attorney general is linked to Ravnsborg’s future.
“First off, I’m not a politician,” said Natvig, a 56-year-old Kimball native who served as Brule County State’s Attorney from 2003-2019 while also practicing civil law. “I’m going into this race with the attitude that I don’t owe political favors to anyone. I would not make any promises to anyone about anything.”
Questions about qualifications
Natvig, a former high school wrestler who received his undergraduate degree in political science from South Dakota State University, said he knows Ravnsborg from their time at the University of South Dakota School of Law, where Natvig graduated in 2000, one year ahead of Ravnsborg.
“We had some contact between law school and (Natvig’s appointment as DCI director in 2019), though not a lot,” Natvig said. “We might have referred a case to each other a few times, but that’s about it in those 19 years.”
The fact that Natvig, who is not a certified law enforcement officer, was appointed to run the state investigative bureau came as a surprise to Jim Vlahakis, a former DCI director who will retire later this year after 10 years as Yankton County Sheriff. 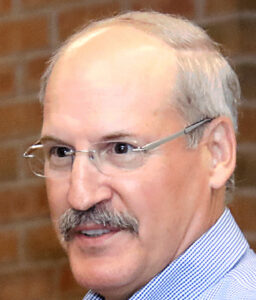 Jim Vlahakis
“I’m in my 43rd year in law enforcement and I had never heard of David Natvig until Jason appointed him as a non-certified law enforcement officer to be DCI director,” said Vlahakis, who was elected as a first-time Republican delegate earlier this month and supports Jackley. “That was odd to me, and I think it was felt throughout the agency.”
Natvig cites his military service as an Army paratrooper and years as a prosecutor as examples of his leadership skills, adding that “clearly there was a reason I was brought in from the outside” to run DCI, an agency formed in 1937 to lead investigations as well as maintain records, train law enforcement and operate the state forensic lab.
Jackley has boasted during his campaign of support from the law enforcement community, including the endorsements of the past five DCI directors: Brian Zeeb (2018-19), Bryan Gortmaker (2008-18), Vlahakis (2006-08), Kevin Thom (2002-06) and Doug Lake (1996-2002).
“If I’m fortunate enough to be elected attorney general, I will appoint an experienced and certified law enforcement officer as DCI director so they can make arrests and lead other law enforcement officers,” Jackley told News Watch. He recalled cases during his time as attorney general, such as when the original state flag was stolen in 2015, that he instructed his DCI director to handle the investigation and personally make the arrest. 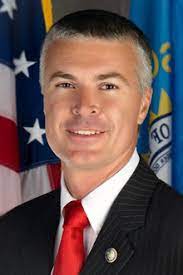 Reflections on the past